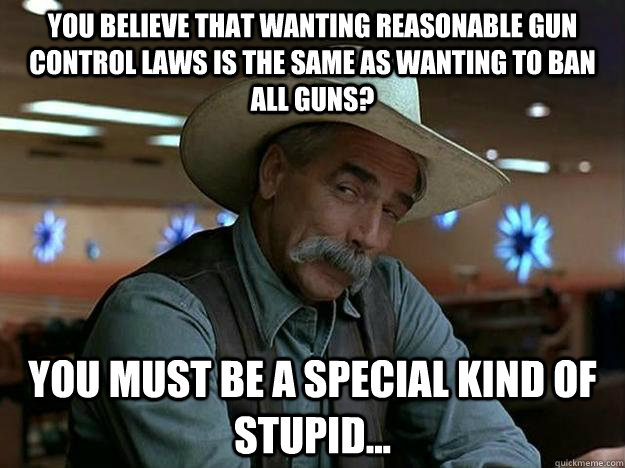 Uncle Eddy: Yeh – and you know I only call when I gotta find someone to bitch to.

Uncle Eddy:  That shooting down your way.  Was pretty close to San Antone, right?

Me: About 30 miles.  Everyone down here is really upset.

Uncle Eddy:  Well everybody is upset when these things happens, but nobody that I can see is doing a damn thing about it.  Your Governor gives ‘em sympathy, them Senators you got – they’re sending prayers.  And ain’t nothing wrong with prayer.  But why don’t them damned politicians do anything about criminals and lunatic guys getting them assault rifles?  Charlie, just about every one of these damned shootings took place cause the guy had him an assault rifle AND he had him a record.  Some was convicted crooks, others was getting’ some kinda psycho care.  But they still got more firepower than the Army give me when they sent me to Korea.  Why can’t the congress guys stop that bull-crap?

Uncle Eddy:  Look, I’m all for this 2nd Amendment stuff.  You know that I keep a couple guns around the house.  And years ago you know I hunted every Fall.  In fact, you come with me one or two times.

Me: I remember.  We had some good times.

Uncle Eddy: So, yeh, we all got the right to personal protection for our family and house and all.  And if a guy thinks he needs an assault rifle to do that, it ain’t my business.  But give me a damned break – if a guy got that much firepower, can’t we make sure he ain’t a loony or jailbird? Hell, when we was fighting them Chinese even they didn’t have that much firepower.

Me:  Well, I guess the theory is if you control one thing, it will lead to more control.

Uncle Eddy:  Bullcrap!  Double Bullcrap!   I got a car, and you got a car.  We can drive them cars where ever we want to, but we can’t go more than the speed limit.  And we can’t bust through no red lights.  And why?  Because it’s dangerous.   So I don’t feel like anybody’s controlling me if I get pulled over on the Ohio Turnpike cause I’m going 100 miles an hour.   That ain’t control – it’s just Bullcrap common sense.   You got to have a license, right?  You got to pass a test, right?  Otherwise you can’t drive nothin’.

Me:  I see your point. But the NRA makes the point – right or wrong – that one license leads to another.

Uncle Eddy:  Ain’t always true.  Driving licenses ain’t changed since I started driving, and that was way back when.   And this is more serious.  See, if a guy does time, or’s in a mental ward joint, why in the hell is he able to buy one of them things?   It ain’t a question of freedom.   Suppose I want to fly a airplane?  Well too bad.  I can’t cause I ain’t qualified for a license. Never took no lessons, I’m too damned old, and I’d be dangerous flapping around up there.  So the government got rules that keep me from doing it.  I don’t see nothin’ wrong with that.  That ain’t restricting freedom – it’s just common sense.  That SOB in Texas – he got a dishonorable discharge for beating on his wife and kid, gets out and gets arrested for doing the same thing.  And then he gets loony treatments.

And he can still boogie on down to the sporting goods store and buy a platoon-size rifle.   That ain’t just crazy, it’s bat-crap crazy.    So instead of them politicians promising to give sympathy – why in the hell don’t they do something about it?

Me:  Eddy, I sure wish I knew.  I suppose it’s because you’re the only one demanding that the political system do something.

Uncle Eddy:  Damned right I am, kid.  Damned right I am.  Here’s the real point – I can’t stand a guy with no stones, especially if he’s elected.   Those damned politicians won’t reason with them NRA guys and say enough is enough: “we got to keep crooks from having guns”. Them NRA guys got families, too.  Ain’t nobody wants their family hurt cause some lunatic bad guy got himself an assault rifle.  Them pols could do it if they stuck together.  But they’re afraid of losing the NRA votes.  But there’s a middle ground – but there’s always a middle ground.

Uncle Eddy:  I fought in Korea.  Not beating on the point, but I know some things about guns.  Now the 2nd amendment deal lets us have guns – that’s a good thing.  But it don’t say nothing about having a gun if you’re a crook or a psycho.  Look, we got the right to vote.  But you lose the right to vote when you’re in prison, right?  You lose the right to do all kinds of other stuff if your under psycho care.  If you’re one of them sex offense guys, you can’t go near a school.  Now having them rules didn’t take away no freedoms from honest folks.  In fact, it protects ‘em.    So I don’t want to ban guns – hell, I plan on keeping mine.  But like them sex offense guys can’t go near schools, I don’t want some nut case having a gun.  That don’t take away from my freedom – it makes my kids safe, because the nut jobs ain’t armed.  Am I makin’ any sense, kid?

Uncle Eddy:  So the bottom line is if them state law makers and the Washington congress guys weren’t so afraid of losing some votes, they’d do something.  So the next time – and there could easy be a next time – this happens, well who’s gonna get blamed?  Sure, the nut case who pulls the trigger gets it – but them scaredy-ass lawmakers they get just as much blame.   In Korea, when a guy ran and hid from trouble, we called him “yellow”.  We’d know he was a damned coward.   And that’s what them lawmakers do. Run away from trouble.  Kid, I know I ain’t too well educated.  but I know this much – if a guy don’t have the stones to make laws that protect us cause he’s afraid of losing votes or crap, then he’s a damned coward.   And ya know what?  It’s always them cowards get you killed.