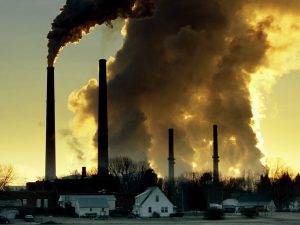 Uncle Eddy: Remember when I told ya “nobody wants to grow up to be a coal miner”?  And you printed that?

Uncle Eddy: Lots of ‘em.  People says “Eddy, you got that right”.  Even pals down in Parkersburg says I got more sense than the prez. Can you imagine him droppin’ that damned Paris deal?  So’s we can make more smoke?

Me: I agree, but nobody can stop him.

Uncle Eddy:   Look, Charlie.  I miss them steel mills, but I’m too damned old to work ‘em anyways.  But I got to tell you, aside from not enough jobs, it’s better in the Mahoning Valley now.  Hell, your Aunt Marge can finally breathe without coughing fit to puke.  Nobody wants no more coal.   You see on TV them China people walking around with doctor masks on.   Kid, you know I lived my whole life like that.

Me: I remember our visits were pretty smoky.

Uncle Eddy: And that was good weather.  I remembers when they was goin’ gangbusters on them coking ovens.  Hell, it got so bad they run streetlights in Youngstown and Pittsburgh 24 hours a day.  High noon and you couldn’t see squat.  And where you was in Cleveland, down near 89th – you tell me it wasn’t just as bad?

Me: It was, Ed.  We’d visit my Grandpa in Fairport Harbor and we thought we were in Heaven.  My Ma would send my sister and me out there for summers to get some clean air.

Uncle Eddy: Damn straight.  Hell, too many guys I worked with is dead already when their lungs give out.   Your old man was one of them, kid, so you know.

Uncle Eddy: But that prez grows up in air conditioned palaces.  He don’t know squat about smoke and crap. So, yeh, we need jobs bad, but we sure as hell don’t want our grandkids dying early from the dirt.  And ain’t nobody’s gonna use coal no more anyway.  Like I says, power companies uses gas cause it’s cheap and there ain’t no boilers to shut down and haul out ashes.  I cleaned out coking ovens when I was a kid and that’s butt ugly work.  Nobody wants that crap no more.  I seen all his slick lawyer pals on TV saying how wonderful it’s going to be.  Ain’t none of them picking up shovels and heading for West Virginia, is they?  Bull crap.