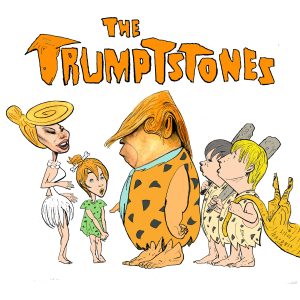 Me: Uncle Eddy!  Man, I haven’t heard from you since Christmas.  What’s going on?

Uncle Eddy:  I can’t figure out how he can get away with all the crazy tweetering and insulting everyone and blaming everyone – and them folks who voted for him, they seem to think it’s OK.   Now how damned dumb do you gotta be?

Uncle Eddy:  Well you see them on TV cause the TV guys like to interview them.  And don’t seem like all the craziness has changed anybody’s mind.  You want an example, I’ll give you some.  He said he’d dump NAFTA – but he didn’t.  Now, I gotta tell you, I ask the guys don’t at Stash’s Tavern, and they don’t even know what the hell NAFTA is.  So I says: “then why the hell did you cheer when he said he’d squash it”.  Well nobody knew – they just cheered cause everybody else was cheerin’.

Uncle Eddy:  Like that Pacific Partnership.  He drops out, and them probably his rich pals say “hey, Don, you’re screwin’ us”.  So now he wants back in.  Then he starts this damned trade war with them China guys.  Now the guys down at Stash’s they’re like me and they all shop at the Walmart.  Now every damned thing there, except maybe tomatoes, comes from China.  Now if you ain’t working, and you’re tight on cash, that hurts.   He was going to settle up with Russia, now we’re almost at war with them.  He was gonna build a Wall – dumb idea – but the guys at Stash’s is still waitin’ like it was going to make them rich.  He was gonna bring back them manufacturing jobs, and we’re all still waiting.  Except the miners but nobody wants the damned coal. Am I the only one thinkin’ about that, Charlie?

Me:  Nope.  I was thinking the same thing yesterday when I was at Walmart.

Uncle Eddy:  So I finally figured him out.

Uncle Eddy:  Just like old Hitler and them Nazis.  You tell a lie, and you keep on tellin. it, and pretty soon ain’t nobody knows the difference between a lie and the truth and they start believin” the lie.  Not bad for an old steel mill guy, eh?  So all them out-of-work guys, you hand them a big old pile of horse crap and they start believin’ there’s a pony hiding in there.